“Never be afraid to get in good trouble,” said John Lewis.

In 1972 two hundred African American music professors, teachers, composers, performers, and connoisseurs got into good trouble. They protested the exclusion of African American music and musicians at the Music Educators National Conference (MENC) by walking away from the convention in Atlanta and traveling to Morehouse College to organize The National Black Music Caucus (NBMC). Its mission continues to be the preservation, promotion, and advancement of African American music through advocacy, education, and performance. Later during the trend of renaming national organizations NBMC changed its name to National Association for the Study and Performance of African-American Music (NASPAAM).

A general summary of NASPAAM from 1979 to 2013 includes presenting 13 mostly biennial national Symposia/Conferences/Summits in the broader field of music education. These events were held in 10 states and Washington, DC. Topics have included the following: instruction for all music genres; the music of notable Black composers, arrangers, and performers; teachers and curriculum, especially for urban schools; and sessions about accreditation and standards in music education. Our last large conference, Celebrating Freedom, was in Birmingham, AL in 2013 during the 150th Year of the Signing of the Emancipation Proclamation and the 50th Year Celebration of the Birmingham Civil Rights Movement. Forty sessions included clinics, workshops, papers, lecture recitals, choral readings, and music literature reviews by musicians from 21 colleges, universities, and public schools. International clinicians were from Uganda and China. Performers included vocal/instrumental ensembles, a choir, and a band from HBCUs; two high schools, and one elementary school with students playing Orff instruments. A special guest was the late Dr. Joseph Lowry, a civil rights activist and icon. Including a special concert by the Alabama Symphony Orchestra conducted by Dr. Henry Panion, and The Blind Boys of Alabama, there were approximately 300 performers. Much gratitude is owed to Ina Allen, Conference Chair and the 38 member Board of Directors.

“Ours is the struggle of many lifetimes, and each of us must do our part,” said John Lewis.

The new century presented challenges of dwindling funds for music education and fewer music teachers. Professional organizations had to adapt to the changing landscapes, conference participation, and attendance. The Board of Directors’ first project to address these concerns was Think Tank #1, The Road Ahead: Keeping the NASPAAM Legacy Alive in the 21st Century. I was appointed President-Elect with the charge to organize the program content and secure national leaders to join our private conversation. It was held in Philadelphia, PA the day after my installation as President in June 2014. The keynote speaker was the late Dr. Warrick Carter, a former President of Columbia College Chicago and a NASPAAM Founder. He emphasized a web reorganization, more outreach, especially youth, and simply “do what you’ve been doing, but do it better.” Wayne Brown, President and CEO, Michigan Opera Theatre and Former Director, Music and Opera National Endowment for the Arts, emphasized that an organization’s financial literacy begins with a self-assessment of its vision, and an overarching message to make things happen. Joan L. Rhodes Copeland gave an overview of the strong financial literacy of the 30 year-old Cultural Alliance of Greater Hampton Roads, VA.

Adrianne Kelley discussed her 32 years of instruction as a music teacher in Pittsburgh, PA Public Schools and the Urban Music Leadership Conference. Danielle Roby, Senior Coordinator of Music Education in Norfolk VA Public Schools, gave an overview of music in her system. Stanford Thompson, CEO of Play On, Philly, explained that his transformative after-school program with underserved children is based on El Systema in Venezuela.

In 2017 the Board of Directors presented Think Tank #2, The Status of African American Music in US Colleges and Universities at Morehouse College Ray Charles Performing Arts Center. Dr. Ted McDaniel secured scholars to present 23 papers about undergraduate offerings and teaching from 17 higher education institutions including HBCUs. He organized the vigorous content with valuable assistance from another excellent scholar and NASPAAM Board member, Dr. Rosita Sands. African American music topics ranged from the philosophical foundations, its role in traditional music core curriculum (theory, history, and composition), plus performance ensembles, and coexistence of specific genres (spirituals, blues, gospel, jazz) with the predominance of European art music genres. One goal was to explore the creation of a new music degree program, either a major or minor in the field of African American music.

Think Tank #2 began with a concert of traditional, African, as well as African American music. Concert performers included four student ensembles, conductors, voice and piano faculty from Morehouse College, Spelman College, and Clark Atlanta University. The program also included a church choir in the Atlanta area, and a Wiley College choir from Marshall, TX. Kudos to Dr. Ted McDaniel, a NASPAAM founder who has continuously been an active board member with longstanding stamina, integrity, and ingenuity. With enormous creativity the revitalized NASPAAM is “doing it better!”

Since the founding of NBMC-NASPAAM with composer Dr. T.J. Anderson as its first President, the organization has not only survived but thrived because of the excellent service provided by the Officers/Board of Directors and the members they served. Following the recommendations that flowed from Think Tank #1, I made a priority to strengthen the infrastructure and secured a web master, directed web development, and added a memorial section. Dr. Jemmie Hawkins, NASPAAM Collegiate Chair developed models for standards to be implemented by collegiate chapter engagements that represent NASPAAM goals, and organized the first collegiate section of our website. Notice our updated NASPAAM logo and first Collegiate NASPAAM logo.

Currently, some Board members have had leadership positions less than 10 years like William Brackeen, Financial Secretary, but others from 29 to 41 years: Dr. T. Marshall Jones, Membership Chair; Dr. Martha Cistrunk-Brown, Treasurer; and Dr. Alvin Amos, Photographer. Amazingly, six others have continued to serve after their terms as President ended: Gwendolyn Carroll, Chair of Think Tank #1, multitasks as Secretary, and Bylaws Chair; Frank Suggs, Executive Secretary; Dr. George Allen, Parliamentarian; and Dr. Mark Phillips, current Web Director assisted by Elizabeth Eccles and Dr. Fred Taylor. Collectively, our 14-member Board of Directors represents 403 years of holding onto their NASPAAM memberships and 349 of those years as Board members of our beloved organization! Despite challenges that occur because the size of the Board is smaller than in previous years, and many of the members have retired from their jobs and careers, I applaud the tenacity, innovations, and commitment of these leaders. We welcome new members with skills and resources who share our NASPAAM passion as valued by millions of people. Please join us in singing the inspirational spiritual,

Keep your eyes on the prize - Hold on 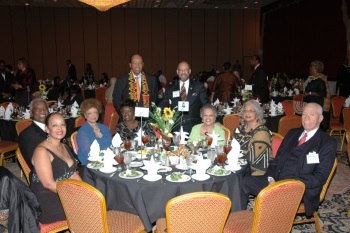 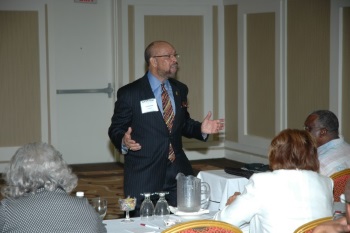 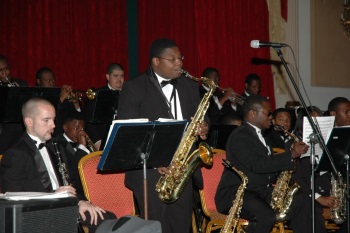